Anthony John Potter (1931-2001) was a teacher of Kabbalah. He worked closely with Alan Bain for many years, becoming involved with the independent catholic church and working with Alan’s Keys to Kabbalah. In 1985 Tony edited a monthly journal on esoteric topics called The Pentacle. Tony lived in London for many years, moving to Somerset in later life.

Tony Potter appears briefly in a short film about Soho Cafes made in 1959, called Coffee Bar [1]. In the frame below, Tony is on the left, discussing astrology with Ernest Page and Glyn Davies. At this time Tony was living in North London and was also closely associated with Alan Bain’s newly formed Kabbalah group. 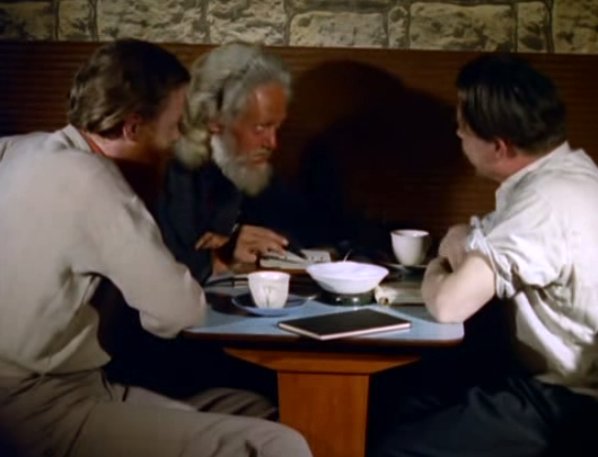 Tony’s approach was practical, and he taught a form of ‘STOP’ exercise to begin a process of self-observation which could lead to greater awareness and knowledge of the workings of the inner world, structured according to the Kabbalistic Tree of Life. He describes the very start of this process in an article in The Pentacle [2], from which the following extract is taken:

The greatest effect is achieved when one STOPs in the midst of an otherwise turbulent situation. This STOP only needs to be momentary. If it is done correctly, the depth of the effect is quite unexpected and, the first time it is experienced, somewhat startling. Indeed, it has been written:-

If, in the midst of troubled time, we stand aside,
And wait until the seeming storm subside,
We stand, though unawares, upon a hallowed ground,
For we have found,
Eternity.

This may sound a little melodramatic, but it is in fact, an explicit description of a properly executed STOP. It has the effect of removing one completely from the limitations of time and space and enabling one to observe the environment as a completely objective phenomenon. At the same time, since the superficial (and largely superfluous) activity of the conscious mind has been brought to a standstill, some of the activity of the uppermost levels of the unconscious mind is allowed to come into consciousness. Since the “language” of the unconscious is almost entirely symbolic, rather than explicitly concrete, the result can be very similar to a “vision”.

John Pearce has written a memoir
of his time in Tony Potter’s group:
The Society of the Hidden Life.

Tony became involved with the Reformed Catholic Church (an independent catholic church) probably in the late 1970’s when Alan Bain was first ordained. Tony remained in the R.C.C. for the rest of his life.

According to Alan Bain’s 1985 book Bishops Irregular, the Reformed Catholic Church in London was established in 1973 by Donald William Garner, Richard Kenneth Hurgon and Rupert Pitt-Kethley as the English branch of the Reformed Catholic Church (Utrecht Confession). In 1982, when Garner died, the succession passed to Hurgon with Ian Kirk-Stewart (who had been consecrated by Garner and Hurgon) as Coadjutor. “The church was still active in London in 1983, most of the organisation being undertaken by Kirk-Stewart with the assistance of Fr. A.J. Potter of Brixton in South London.” [3]

In 1985 Tony edited seven issues of this monthly journal, most likely covering the period Jun-Dec 1985. 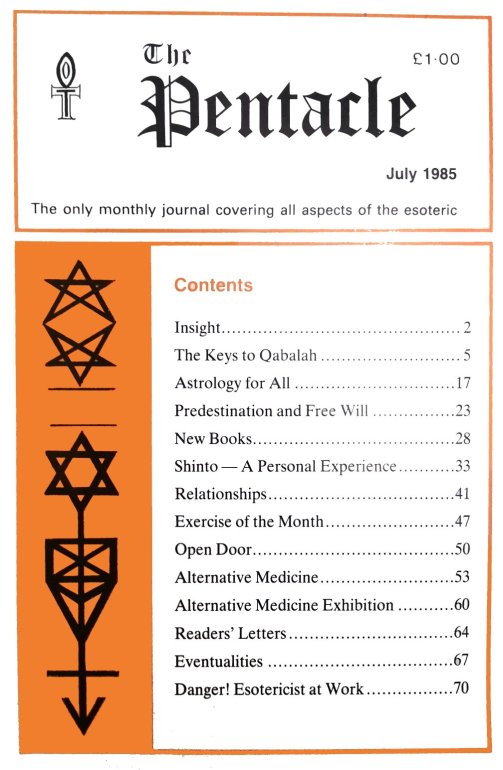 The biggest article in each issue is a serialisation of Alan Bain’s Keys to Kabbalah (although the articles are attributed to ‘Paul Grant’). There are also regular articles on Astrology (by B. E. F. Gardener), Alternative Medicine (by “Aesculapius”), Aikido and Shinto (by Andrew Moxon), and Relationships (by E Francis). There is also an ‘Exercise of the month’ column which builds on the ‘STOP’ exercise discussed above to a more elaborate meditation practice. The first ‘Exercise of the month’ column is included here.

In the mid-1980s Tony moved to Somerset, where he continued teaching until his death in 2001. 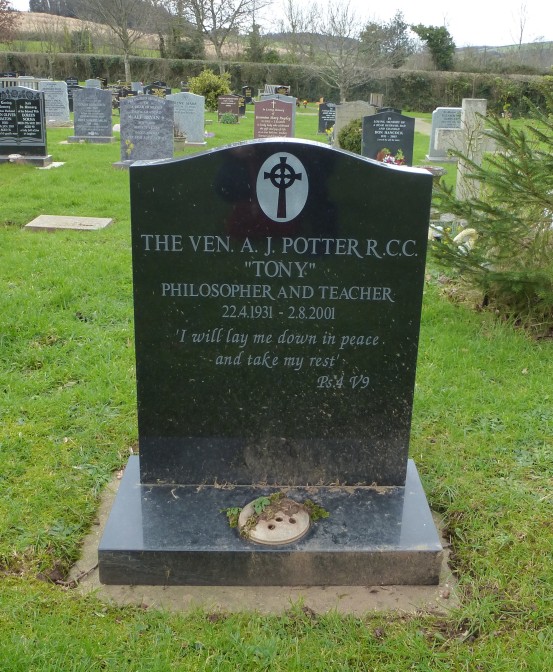 [1] The film was part of the Look at Life series produced by the Rank organisation. It is available at http://www.youtube.com/watch?v=B92MnoPVtGs and Tony appears around 5min 50sec into the film. The film details are on imbd at http://www.imdb.com/title/tt2207525/combined

[2] The Pentacle, June 1985 issue. The full article is transcribed here.

[3] For most of this see the entries in Bishops Irregular for Donald William Garner and Richard Kenneth Hurgon.